In fifth grade, during one of those structured periods of down time in the computer room, I started writing a story called “Evolution” in which the primates evolve to surpass human intelligence and overtake our society (I was not popular). Probably this was on the heels of a lesson on Darwin and common ancestors.  Or maybe that was around when we went on a field trip to Binghamton’s Ross Park Zoo. But my latest obsession was with the concept of natural selection, which to me then took the form of a fascination with those animals most closely related to us. There was the implacably human quality of a gorilla’s expression, the chimp’s playfulness and the same time its calculated interactions, the contemplative affect of an orangutan. What was it about them exactly that made them seem human – a there-ness, a curiosity? – and maybe something else. A resentment, a resignation.  They asked back the question of our stares.

If living things incubating in the millennia had changed that drastically – if we had come from the same family tree as this gorilla, who at the Buffalo Zoo I watched twist open his orange-aid, close his lips around it, tilt his improbable noggin back and sip it down in three smooth contractions – how long before this particular manifestation of nature got tired of people killing it for its hands or  sticking it in a room with two strangers to be taunted by what looked like its upright, hairless children, always out of reach beyond barriers it wasn’t allowed to understand?

It was during that time Hoyts Cinema on Front Street was the shit – 12 theaters, a second floor dedicated to first person shooter arcade games like Time Crisis or LA Machine Guns, huger overpriced slushy drinks and for some reason, Pizzaria Uno personal pizzas. On the way out, with my mind still stuck onto the residue of some film’s reality, I’d seen hanging up on the theater’s wall an obscene three-eyed smiley face with the word Evolution. The film, which I never saw, turned out to be a creature-feature starring X-Files superstar and probable android David Duchovny.  “Hunt down the mutating alien threat” type deal. Not exactly where I was going in my story. But the implications, along with those of the iconic X-Files and Twilight Zone episodes, as well as several not-so-iconic shape-shifter sci-fi specials, was of man having put himself in a precarious position, in tangible opposition to a personification, representative and representation of the very evolutionary forces that had forged him, an unwillingness to relinquish his position at the top of the heap, as “fittest” to survive. 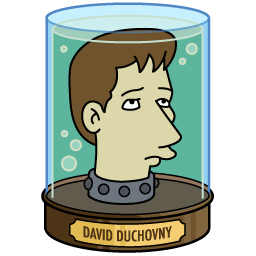 I brought my story home with the enthusiasm of the kid certain of the irreplaceable nature of the quarz-and-pyrite-strewn rock he’s yanked up. And then my mom explained Planet of the Apes. After the anguish of reconciling how handily I’d been beaten (it was a dirty trick, a pre-emptive strike, making the movie two decades before my birth) the fact that the idea already existed in the world as a full series grew my head a little bit, and also forced me to consider whatever truths were at work behind these myths.

Several months later, the 2001 remake of Planet came out, and I watched both. An Animal Farm-like dystopian allegory, the story, like my own failed one, has as an engine in human arrogance.  The future-us, who had advanced to the point of deep-space travel, had failed to recognize whatever laws of the universe allowed their party to travel far enough to end up on earth hundreds of years into the future without the slightest idea when or where they were (Not to mention the whole losing civilization to apes thing).

As with the pigs in Orwell’s novel, the abominable qualities in the evolved apes are human uglinesses allowed to fester to society-infecting strength.  For instance, Dr. Zaius extinguishing the protagonist’s paper airplane, and with it any evidence backing up the astronauts’ story of having crash-landed on the ape world, is hardly an unexpected course of action, but a predictable and fitting response to a story that could challenge the legitimacy of the Apes’ naturally bogus origin story. It is also a gut-icing echo of the suppression by politicians and legislators of irrefutable evidence of human-driven climate change, and the teaching of Darwinian evolution as mandated, standard, universal.  These topics are not avoided, but actively opposed by influential lobbying groups because of their intended damage to the narrative that unmitigated  industrial progress and the spreading of Christian values will be the savior of all we claim to hold dear (obviously racist policing and legal systems and the need to do something about policies allowing murderous whackjobs – technical term I’m sure – to legally stockpile guns are only a couple that also belong on that list). Planet of the Apes confuses the wagging finger of culpability by reminding us that warfare goes far, far back down into the family tree (troops of chimpanzees, for instance are known to carry out coordinated  raids and ambushes on their territorial rivals in wars that span multiple generations)even playing off of the unfortunate myth that people came from apes.  No, the unseemly traits witnessed in the apes on the screen and in the evening news are older than modern humans or chimps. So the sociological concerns underneath POTA include not simply a fear of human nature’s shortcomings, but a fear that progress and evolution themselves include a self-limiting mechanism, which is to  wire whichever beings enjoying their benefits to eventually become so selfish and arrogant as to self-sabotage in epic fashion.

Which is sort of where I came to the keyboard in fifth grade.  My non-story and POTA (and come to think of it, Terminator and The Matrix) are based in the worry that an Icarian oversight will corrupt our ambitions, allowing some humbler “citizens” of our world (always products and victims of human civilization’s hierarchical structure) to take the reins, that it might be too late for the human spirit to redeem itself in the traditional way – by remembering/recognizing that compassion and humility are requisites for a happy and connected society.

This is a text widget, which allows you to add text or HTML to your sidebar. You can use them to display text, links, images, HTML, or a combination of these. Edit them in the Widget section of the Customizer.