“Most men make themselves as useful around the kitchen as ill-trained Labrador retrievers,” writes David Barry in the Thanksgiving-themed “Turkeys in the Kitchen.”  Barry believes he’s speaking for a lot of us. While eager to reap the benefits of the turkey-day cook-a-thon, he “would no more enter the kitchen than I would attempt to park a nuclear aircraft carrier.”

I can relate, although it’s not so much my gender as my sensory dysfunction that weighs me down in the kitchen.  On Thanksgiving day, surrounded by bushels of haphazardly shaped things to peel and chop and boil and bake, and other things that, when combined with the contents of several brightly colored boxes and cans will somehow become pies, all while the turkey breasts in the oven are trying their damndest not to be ready on time, it’s easy to feel overwhelmed.  To add to all that, imagine that your stomach is a life-ruling diva with an impeccable watch and who regularly demands thousand calorie breakfast sandwiches. Also imagine that despite trying to impress your girlfriend on her first Thanksgiving with your family, you have to yield any peeling responsibilities to her as just about any fine motor task you set out to accomplish is hindered by a clumsiness relatively equivalent to soaking your fingers in ice water and wrapping them in gardening gloves. 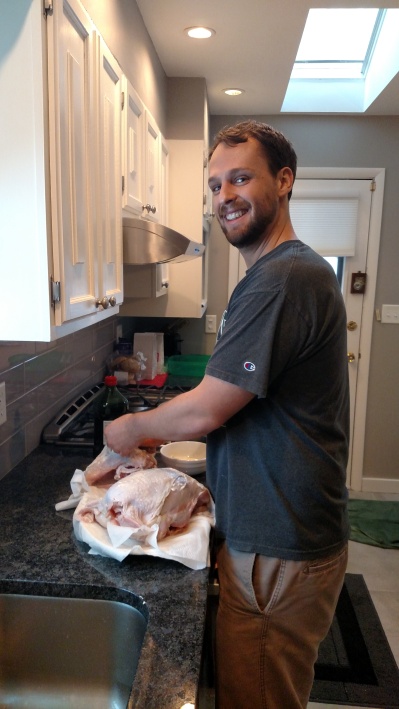 “Dylan, you were a tough nut to crack,” Mom quips, referring to my childhood cooking apprenticeship “but we cracked ya!”

She’s been peeling and slicing potatoes with what can only be called mechanical efficiency while I chop the already-peeled(thanks, hon) yams with surgical care. The topic of conversation is Christmas cookie creation, past and future.  As Mom is always preoccupied with keeping the cookies organized and unburnt, and because my own tendency is to  proudly smear a half inch frosting layer on an unsuspecting Santa, it’s left to Laura to paint and accessorize hers down to the individual sugary whiskers.

“Yeah, your attention span was not the greatest,” Laura laughs.

Celeste looks up at me from a carrot and smiles. “Well, I like decorating.”

“Oh, good! Then I can frost my five cookies and get out of th- I mean, politely keep you company and definitely not eat all the frosting.”

Barry and I come from different generations. Having been raised in a single-parent household by a teacher also finishing her graduate degree, incompetence in the kitchen was not really an option for Laura or me, autism or not. Now,  as the ingredients cook and conglomerate and become a vegetable tray, candied yams, squash, and four pies, it’s impossible not to feel the pride “turkeys” like Barry are missing. After years of kitchen meltdowns and mishaps, of dumped pots of pasta and burnt forearm flesh, of overdone burgers and exploded enchiladas, I can perfectly replicate my mom’s apple crisp and my dad’s risotto, her garlic mashed potatoes and his chili. Laura can do all of this as well as bake her way out of anything.

But autism isn’t something you outgrow, and I’m not without my challenges. It isn’t so much the physical aspect of cooking that bothers me anymore.  It’s, the scheduling, the logistics.  My sense of timing has always been painfully literal. Having no concept of common human tardiness or the saying “fashionably late,” I was always the one who showed up early for school dances, who got anxiety when the teacher didn’t let us out in time to be in the lunch line exactly as scheduled, who for some reason continually takes as gospel a friend’s assertion that they’re “10 mins away.”  So a stubborn pan of eggplant (or a willful potroast) is my arch nemesis.

Thanksgiving dinner isn’t out of the woods, yet. As the side dishes near completion, the obstinate birds are a good fifteen degrees away from the magical 165 degree marker that lets us all after a good five hours, eat. The cheesy, three egg monstrosity from breakfast has quit on me, and the hunger needles are back. 3:30 has come and gone and Dad and Tony (Laura’s boyfriend) have arrived and we’re seemingly no closer to eating.

When the logic sometimes employed at restaurants fails and in returning from the bathroom the birds are still in there doing god-knows-what except cook, I pass from comic, self-aware irritation to something like despair.

It’s been said that when one person in a family has autism, everyone has autism.  And in this case as always, everyone rises to the occasion.  Celeste puts her arms around me and laughs the laugh that takes me out of my spiral. Laura giggles and jokes empathetically.  Mom suggests rather insistently that I have half a biscuit.  Dad’s rendition of our classic “why-don’t-you-eat-a-powerbar, no-I-don’t-want-a-stupid-power-bar” argument complete with stomping and red-face, steers the room away from my abyss and towards that proverbial lighter note.

And of course, the dinner is a success and the world doesn’t end.  We go around the table with the things we’re thankful for.  I’m thankful as always for the support, for a family and a partner who live with the eccentricities that come with my Asperger’s, who don’t leave me out when it comes to teasing or fun-making, but never make me feel odd or incapable.  I’m thankful they understand me and my disability the way they understand themselves and their own struggles. I’m grateful to have a partner who takes me out to get soul food for my birthday, but isn’t afraid to challenge my excessive tendencies. I’m thankful those in my life take my appetite and its consequences seriously as it takes itself.

(I’m grateful they understand I will never ever again deal with the sensory perdition that is Black Friday shopping.)

Far from being kitchen fowl, I’m grateful I was made to push though my difficulties, but allowed to participate in my own way. I’m grateful that the Lauras and Celestes of the world will be crafting their masterpieces while people like me sneak the tenth finger full of frosting and sigh at all of the as of yet unfrosted cookies.

This is a text widget, which allows you to add text or HTML to your sidebar. You can use them to display text, links, images, HTML, or a combination of these. Edit them in the Widget section of the Customizer.